Interview in We Live in the Orbit of Beings Greater Than Us
January 22, 2021
Interview

My interview was included in Patrick Farnsworth’s beautifully provocative book We Live in the Orbit of Beings Greater Than Us. Below is Patrick’s introduction of me & my interview from the book.
•••

To further this point on the limitations human beings have in acknowledging, let alone mitigating, the ecologically destructive impacts of our ways of living and being on this planet (again, this is especially true for the mass societies of the global North), consider the work of Holly Truhlar.

Holly is a lawyer, grief therapist, and community builder, and she caught my attention with her provocatively titled essay “Mainstream Psychology Can Go Fuck Itself,” which addressed the ways mainstream psychology largely lacks the framework, language, and tools required to adequately counsel those who are becoming aware of these disintegrating systems.

As Holly states in her essay, mainstream psychology “puts the onus on the individual and takes the focus off of the violent and divisive systems we’re in,” which in turn disempowers the individual from preparing, in any meaningful sense, for what lies ahead.

PATRICK FARNSWORTH: What have you discovered in your work about human beings that modern psychologists could maybe implement into their understandings of psychology, the human mind, human relationships, etc.?

HOLLY TRUHLAR: I am constantly bringing people back to the ways in which our environment and the systems around us are impacting us. So I would say in a session when it is appropriate, “Well, this is partially due to capitalism, right?” Or, “This is the effects of patriarchy,” depending on the client.

One thing I’ve found is that, more than what we’re taught in psychology, self-help, or social work, we are so much more impacted by the collective and the systems around us than we think we are or than what we’re told we are. I think that if we’re not continually working with that, we’re actually doing a disservice.

I’m still really interested in creating more dialogue or protocols (but I don’t really like the word protocols) around how to respond to people regarding near-term collapse, near-term human extinction. This is why I’m excited about Jem Bendell’s work, because what he is doing is actually categorizing: here are possible responses, here’s some kind of protocol that I’ve tried or that I want to put out there. I find that really interesting. I hope that the field continues, and my goal is to continue to do some of that. There’s a lot that’s unknown.

I actually think most people are more aware of what’s happening on a somatic level than what they are able to articulate—even people who, as other people would say, are “asleep” or seem like they don’t know. For a lot of people, there’s this sort of like buzzing in our bones that we’re really aware of, this low level trauma that I think most people are walking around with.

PATRICK FARNSWORTH: That piece does touch on the things we just mentioned: it discusses how mainstream psychology, Western psychology—the profession itself—is not addressing the grief, the despair, the frustration, the anger: all of the things that people are going to feel when they are just paying attention. They’re not going to have any the tools, the language, the comprehension, to fit their grief and despair within a Western psychological framework. From your perspective and what you bring up in your piece, why is that the case?

HOLLY TRUHLAR: I think it’s multilayered. One thing is that we as a species are ill-equipped for what’s happening—I really question whether intellectually we even have the capacity to fully understand, and more and more I don’t think so. I think humans have a really hard time even understanding what exponential growth is, let alone the trifecta of what’s happening around ecological, economic, and social collapse.

Psychology is actually a pretty young field still. It’s more complicated than this, but Freud is sort of the grandfather of psychology, and he’s a white man who was working for the upper class. He actually changed a lot of his findings so that he could still get funding, and that has continued throughout the field.

And also—as with most things—it’s incredibly affected by neoliberalism. There’s this real focus on the individual and individual choices, and there’s such a lack of analysis around power, or a systemic analysis or group analysis. On top of this, it wasn’t until the last 10 years that we’ve developed a real vocabulary around attachment and relationships and what that means. Attachment couples therapy is the new hot thing now. It has roots in attachment parenting and all of that, but the research around it is really new, and it’s hyperfocused on couples or the nuclear family. There’s still a lack of research and vocabulary around communal secure attachment and what that means.

I think there are also historical roots to what it’s lacking. Psychology is colonized. We’re really talking about something where the layers we have to go through to find something healthy are so thick it almost seems magical. It seems like we’re talking about magic when we talk about the field or the third body that’s created when a group gathers or what’s being dreamed through a group. That is what I’m interested in, more and more. 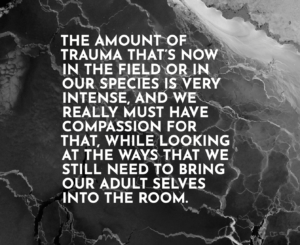